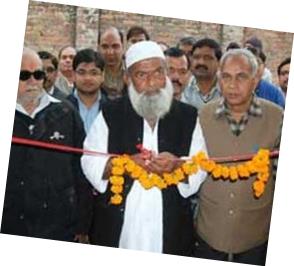 Ahmed offers namaz five times a day, decided to not only give up his land in Madhuban Vihar colony for construction of a Shiva temple but also laid the foundation stone of the temple. His selflessness and feeling of brotherhood reflected when he also collected donation and bricks for the temple, reported Amarujala News. The foundation laying ceremony on Thursday took place in the presence of several people from the locality and devotees from nearby Neeva and Salori areas. “He sacrificed his land for construction of Mahagauri mandir and he also extended co-operation in other things,” his admirers told Amarujala.

Ahmed said,”We all are servants of God. Then why should we differentiate ourselves on the basis of religion?” Ahmed is also the Conservator of Islamic seminary, Ashfaq welfare memorial society where kids from poor Muslim families take religious education.